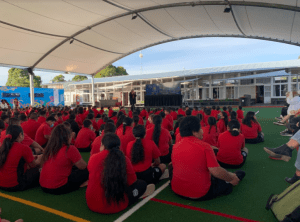 Monday 2nd of May,

Today was the first day back to school for the 2nd term of the year. Students formed a line to sit across facing directly to Mrs Nua who was at the front, as we started to mute the volume of the loudness across the cloud (Te Kapua) Mrs Nua started us off with a welcoming hello to everyone who had returned from their holidays. Then she introduced us to the theme of the term. It was “We know the way” it was interesting because no one knew what she meant by it, other then the song “We know the way,” after that she changed topic by telling us that there were a few teachers missing from the assembly.

Later on she ringed Mr Burt first since she noticed he was gone first, Someone had answered the phone and had said that he had been in the toilet, she then called someone else after that and it was Mr Jacobson he was near the bike shed, so Mrs Nua directed Mr Jacobson to Te Kapua from the bike shed and he found his way back. Mrs Nua then found Mr Jacobson and we all cheered “hooray!” for Mr Jacobson since he made it back. She then called one of the office ladies because one of them weren’t there, Some how she ended up onto the field so then we directed her straight to the te kapua like everyone else and did the same thing to Mr Burt, Directing him to the Te Kapua. After that we all gave a hooray for each and every teacher that came back from each location they were lost on.

Team one was first, they were telling a story and acting it and they were learning what bee’s do and how they get from one destination to another quick, Miss Hockley was the narrator of the story while the other three teachers were acting in the story, two teachers were finding bee’s while the bee was going back to the hive.

Team two were acting as pirates each had something to do one teacher was a narrator then one was the captain and the other two were naughty for throwing the captains stuff around while he was sleeping. The audience were laughing as students had went up to do something for there role.

Team three was doing a Team three teachers vs Point England Students, questions up to ten, Whoever gets the most right wins! then One teacher picked some kids from each team to come up and answer questions, and it was about scratch and coding.

Team four was a movie about Qr codes and scratch to understand and make Qr codes, they were talking about things in the videos while taking a photo of the Qr codes.

Team five are learning how to control robots and understand how to use and look after them well.

One thought on “Immersion Assembly”